Hello Lovelies ,
tell me ...is it too early to decorate for Easter  ??? I haven't seen any Easter dec's on the blogs I visit yet , but I have to admit I put mine up at the weekend.
I've had some bare branches ...saved from Mr BMs tree pruning .....in my conservatory for a couple of weeks now. On Saturday I succumbed and decorated them with my little collection of Easter things. I actually let one of the boys do this .. and only  rearranged things a little after he had finished. 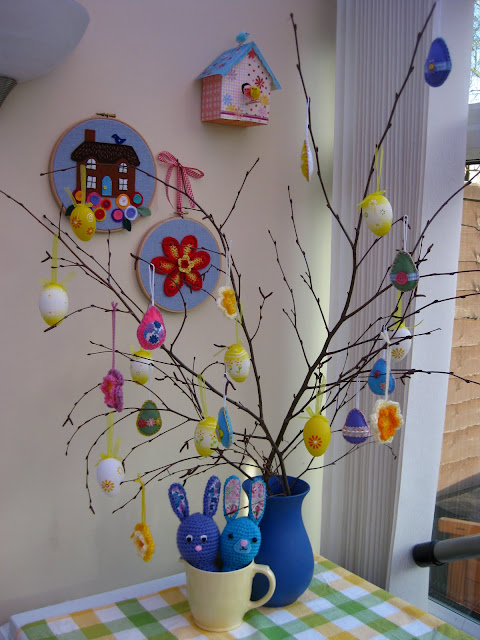 Ummmmm....simple twigs , decorated with eggs of the bought variety...... 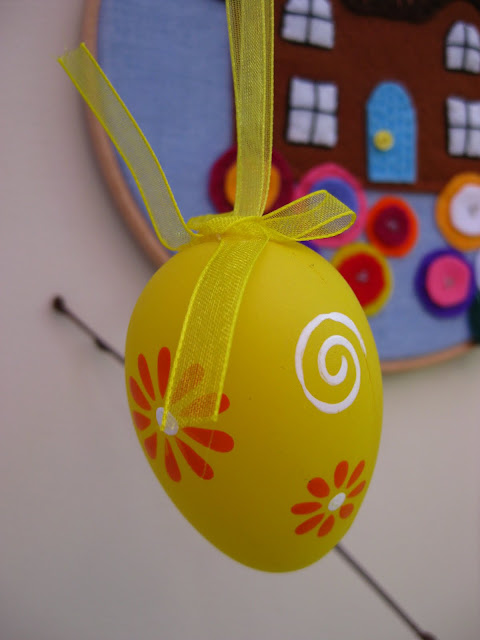 and the homemade variety..... 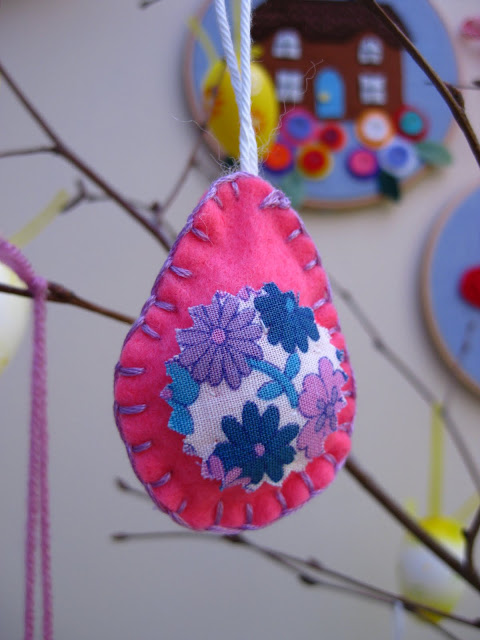 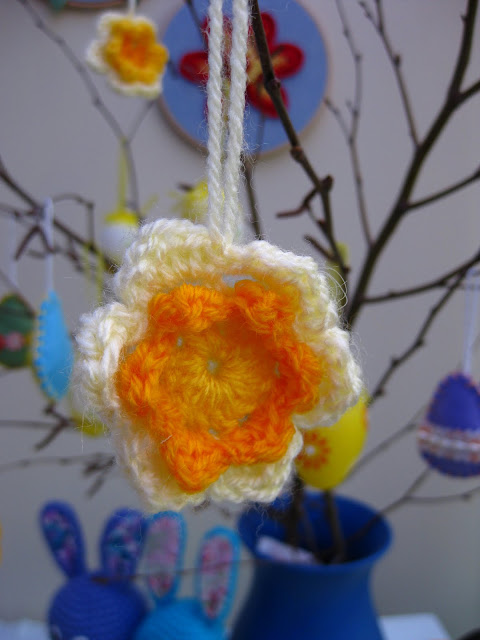 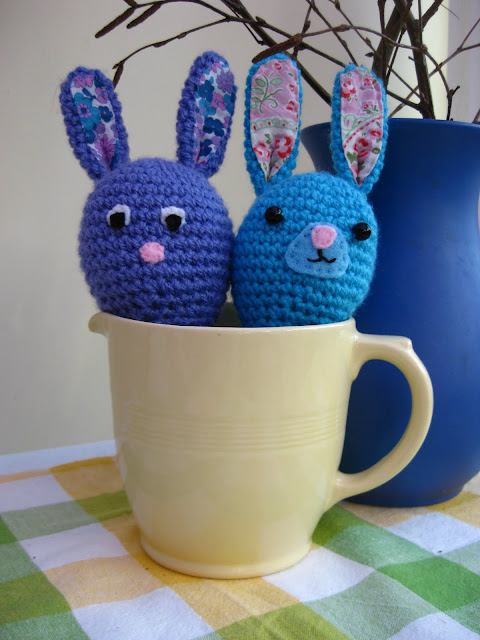 When he was decorating the tree my boy said " this is your crochet haven isn't it Mummy " Certainly looks that way !...... 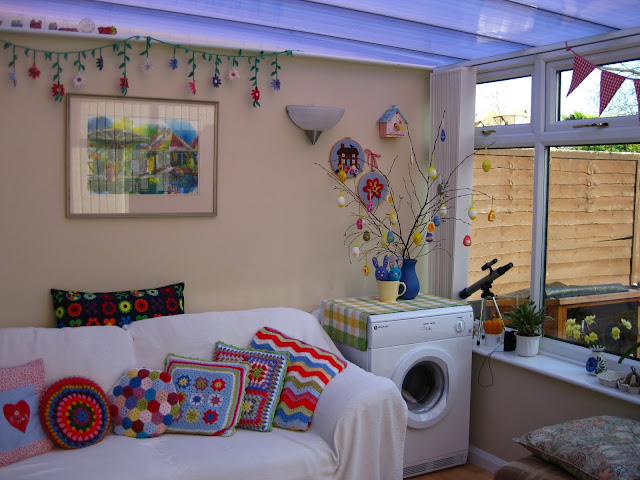 Comparing this corner with last year I can see all the extra pretties and that makes me happy.
In fact there is a make that is very new in this corner...did you spot it ??
It's there high up on the wall... 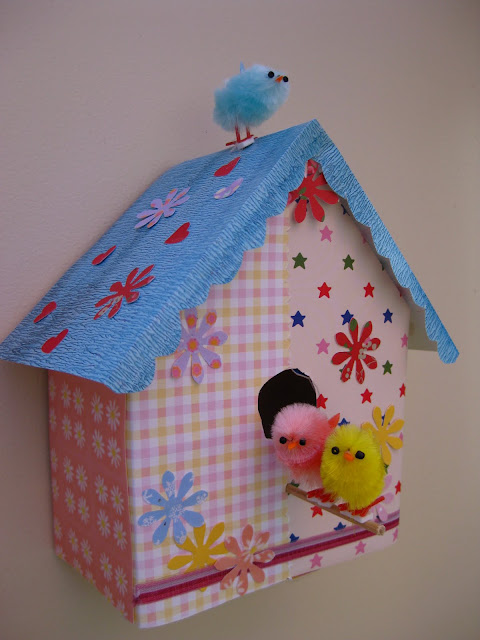 I made this late on Friday ( I think it was finished after midnight ) It was inspired by Jane at TEAWAGON TALES fabulous version. She's even done a " how-to" .Thank you Jane . 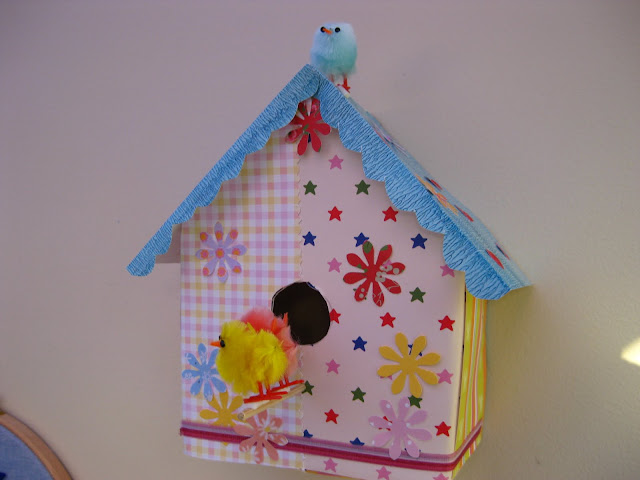 I had such a great time  making this . I know it's a great project to do with kids but they were in bed and I needed to make one.
I can't tell you how much fun it was.Picking out pretty papers and punching out little shapes to add ( I've made cards in the past so I had plenty of supplies)........... 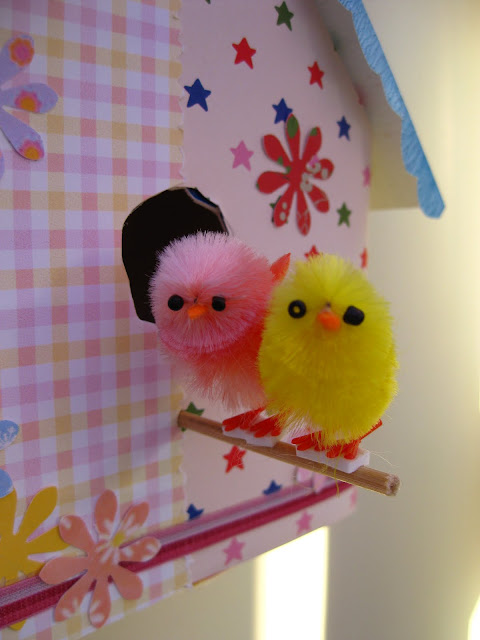 I didn't have a gorgeous bird like Jane's but I think the cheapy chicks ( should that be cheepy chicks :0)) look a lot of fun .Actually blown up this big they look pretty scary but they look great from a distance !
I've made it Easter-ish but not too specific as I know I will want to leave this up when the other dec's come down.( though I will probably change the birds )
I made mine from a tissue box, with a trimmed down kebab stick for the perch as it what it was what I had lying around.
If you want a quick make that's loads of fun this takes a lot of beating...you could even let the little ones join in if you are feeling really generous :0)
Jacquie x
Posted by Jacquie at Monday, April 11, 2011