Hello Lovelies , Hope you had a good weekend .
Thank you for all your comments on my last post. A few of you asked about the names of some of the flowers so I have now added them under each picture . Should have done this before but I was rushing to take the boys out .

Anyway back to my latest project , would you like to see what I've been up to ? 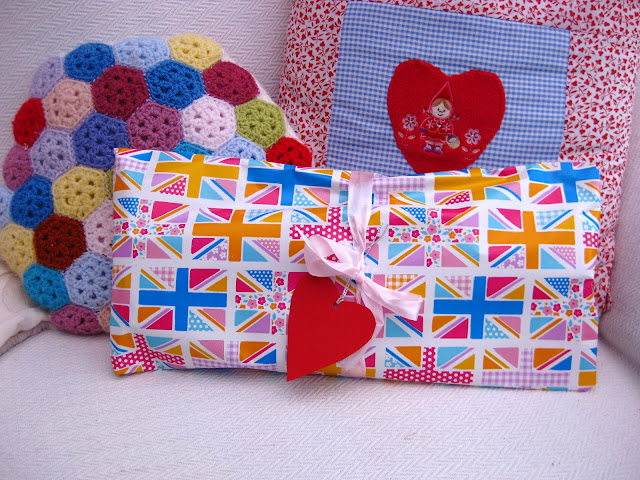 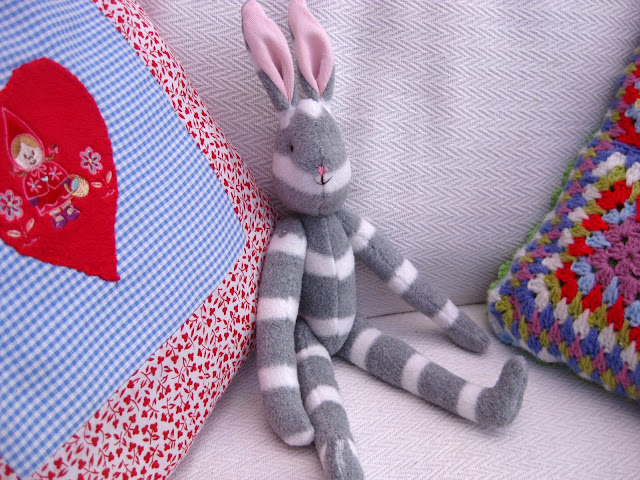 Well , what else could it be but a bunny :0)
What do you think ?? I thought the stripy fabric ( that I salvaged from an old jacket of the boys ) lent it's self to lovely long limbs and I'd spotted some long legged bunnies similar to these ages ago so that was a little bit of inspiration that had lodged in my brain.

I used an old T.shirt for the pink of the ears and attached the limbs using some rather nice mother of pearl buttons I had in my stash.... 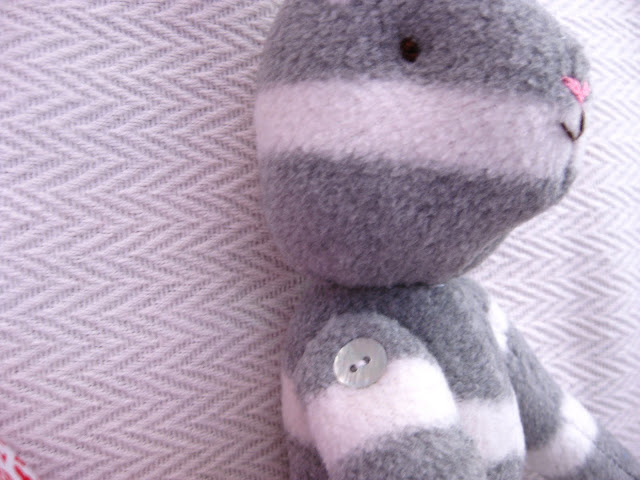 I am really pleased how this worked out as the limbs are quite poseable instead of being fixed in one position.


I used this free online pattern as a basis for my Bunny , though the only piece I didn't alter was the body :0)


Now I'm sure you will agree she needs some clothes. First I made her a pretty dress..... 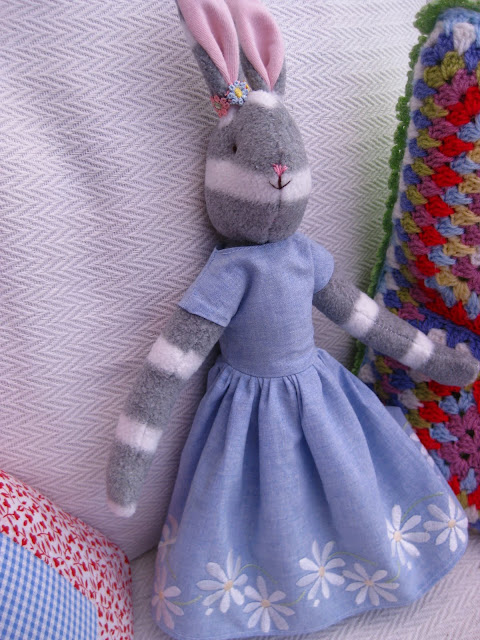 Maybe some of you recognise this thrifted curtain material that I also used HERE.
Oh the joy of having a good excuse to make something so pretty and feminine , I Really enjoyed making this dress .I also added flowers around an ear.... 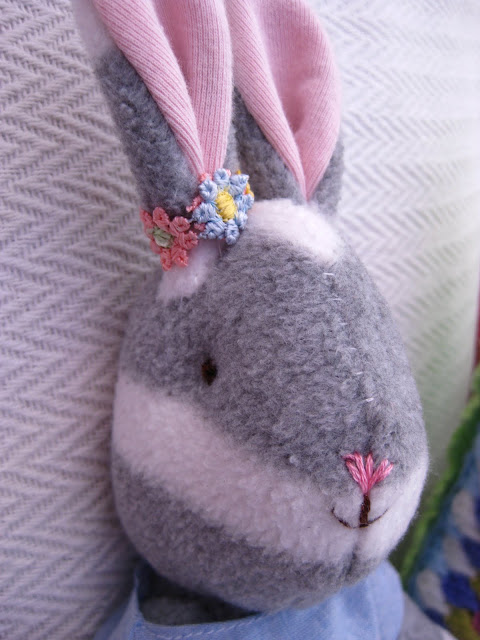 I was having so much fun I decided to make her a little crochet jacket too ..... 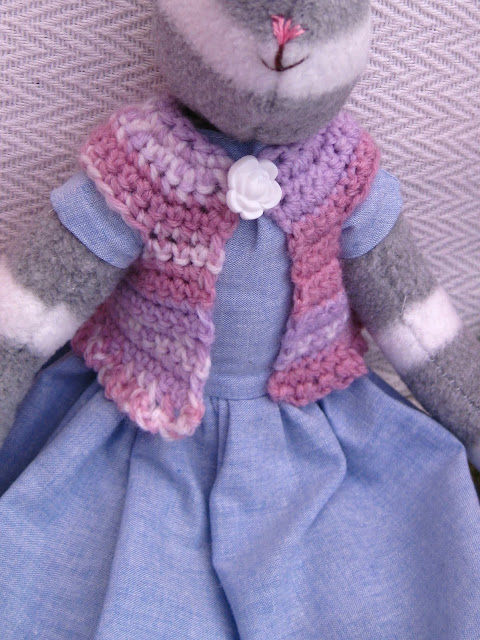 The variegated yarn I had in my stash was perfect for this project
and the pretty flower button was in my Santa swap parcel :0) 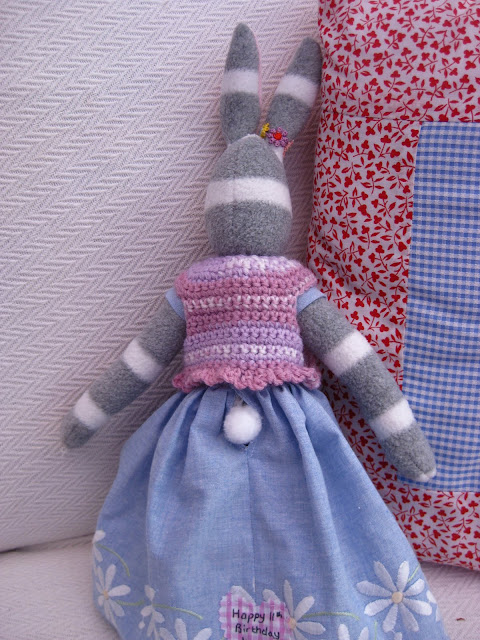 I couldn't forget the cotton tail and a little message for my Niece.

She is eleven and we have also sent her some money for whatever she fancies , but I'm thinking that even today's sophisticated pre teens will still like a cute girly bunnie, hand made with love :0) 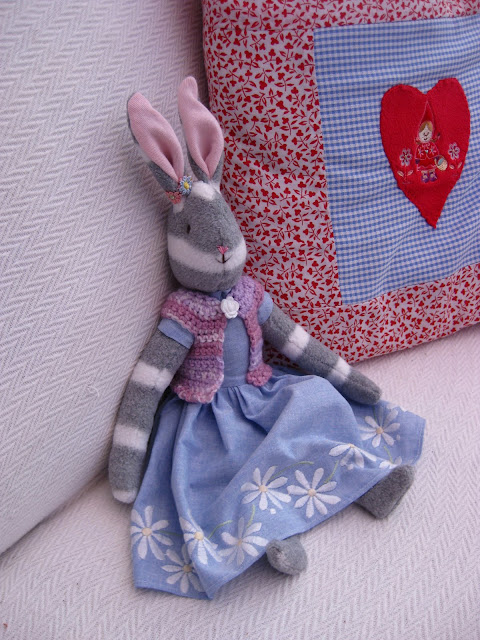 Even though I can see lots of bits I would change if I made another ( like slightly shorter arms ) I'm still pleased with the overall effect. My rusty sewing skills have been tested with this project . It's a lot more involved than the Cuddly Russian doll I made for my younger Niece.

For me a lot of the enjoyment and satisfaction of this project comes from the fact I was able to use mostly recycled supplies and turn them into something so pretty without having to go out and spend money . I like the whole " make do and mend " philosophy that our grand parents were masters of.They were "Green" before anyone had thought of that term :0) 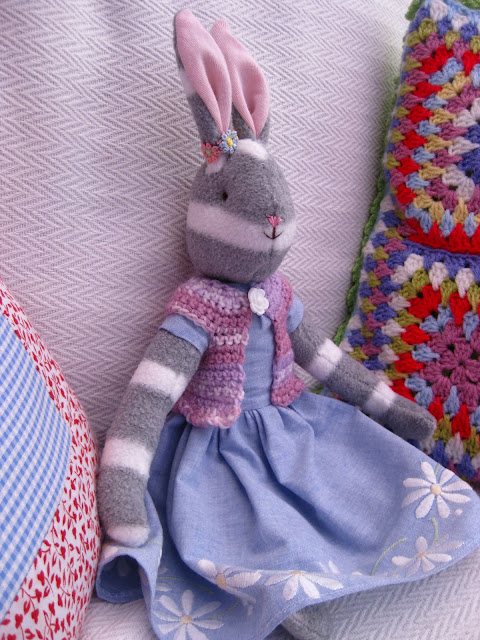 I hope you lovelies can find some time for whatever craft makes you happy this week.